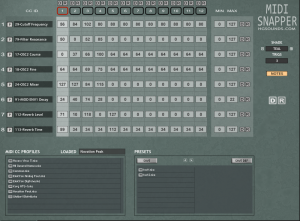 MIDI Mod has been updated to 1.01 with the following:

MIDI Snapper is a simple MIDI Instrument that allows control over up to 8 MIDI Control Changes with 12 States that can be changed via the assigned Octave of triggers shown in Red on the Kontakt GUI Keyboard. It supports MIDI CC Profiles created with the onboard Editor so that a list of Named and relevant Control Changes are the only available options in the Menus.

There is also a MIDI Recorder which can record all MIDI Data which can be drag n dropped elsewhere.