The idea behind Cassetto was to create a synthesizer which has an old and slightly faulty sound as well as a fairly fixed yet interesting architecture. The end result is a synth with it’s own character and capable of some very unique tones. Although Kontakt is often used for complex samples, Cassetto uses sampled oscillators so that it is a true synthesizer and all sounds are constructed in the same way as any other subtractive synth, it comes with 200 presets with more to come, however it is also a synth that invites you to make your own.

Firstly, I chose the Elektron Analogue Four for the Oscillators as it has a nice selection of strong analog waveforms. Each of the Raw Waveforms was then recorded note by note over 4 octaves onto a very old and well worn cassette. I have owned this cassette since at least 1987 as it had me playing guitar badly around that time, which was recorded over a Pet Shop Boys album funnily enough. It was the 3rd cassette I tried and had the most dropouts which is what I was looking for. This is the Cassette:

I had been looking for a suitable cassette deck for this project for a long while, and a friend came up with this one (JVC CD-1635 MK II) which is actually a really nice machine after bit of de-oxit, I’d already tried a couple of others with auto gain inputs which was a bit too extreme, I was after subtlety. Here is what it looks like (you can see the cassetto! cassette if you look closely).

These were then recorded into the computer through a focusrite OctoPre and each 4 second sample was looped manually at different lengths to provide the multisampled oscillators. I was actually surprised how lovely they sounded once tamed by Filters.

It also occurred to me that it might be interesting to use some single cycle loops from clean recordings of the A4, which would add a whole other dimension to the sound possibilities, so I did this for 5 of them, and they sounded good and added a nice contrast to the tape Oscillators. I then finished off the oscillators by creating some detuned and mixed groups of the single cycles. I also tried to be a bit imprecise with the looping of the single cycles to give them a slightly detuned broken oscillator sound, although it is subtle.

I created a soundset for Bassline-101, and whilst working on it, I really came to appreciate the simplicity of the SH-101 design and so in my head that was the starting point for Cassetto. As you can probably see it went way beyond that simplicity, but I tried hard to keep to the idea of making it hard to make bad sounds which is the strong point of the 101. I just can’t seem to keep things that simple…

My second thought was that I wanted it to be an instrument that Boards of Canada could use, I think out of any band they always seem to get sounds out of synths which is hard to describe, but to me always sound like childhood/Nostalgia. So, I had the cassette sampled oscillator, the next thing on my list was a way to warble the sound, a wow and flutter dodgy cassette sort of thing. On the synth it’s called Unstable (UNST) and it works very nicely to create that feel. Finally I wanted to get some subtle saturation and most importantly sample rate/bit rate reduction in there, which is not only great for emulating digital gear, but it can make sound take on characteristics of Mellotrons and acoustic instruments sometimes. After some experimentation I decided to place it in between the 2 filters which leaves the option of having either a Low Pass in slot 2 for grit, or a High Pass for Noise and it works really well.

Initially I started with hard wired Serial Filters, but after trying out splitting the filters one to each oscillator it opened a whole new world I couldn’t ignore, I followed that up with giving the ability to use the Filter envelope to control the Volume of Oscillator 2 and/or Noise. This just makes so many new sounds possible for the sake of a couple of buttons.

With the Arpeggiator I began by using the one I’d built for Multiverse, however I really wanted a Chord Mode and I ended up rebuilding it and so it does function slightly differently. It is basically a standard Arpeggiator with Sequencers grafted on, this can lead to some very complex polyrhythms. The other addition over the Multiverse ARP is the 16 note Pitch Sequencer which if you play a single Note behaves like a classic Sequencer.

IMPORTANT: You must have the full version of Kontakt 5.6 to use Cassetto or Kontakt 5.5 to use Micro Cassetto, they will not load in earlier versions. They will also only work for 15 minutes in the player.

Be the first to review “Cassetto” Cancel reply 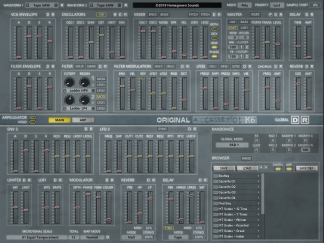