The following Instruments are Included:

Kosmology is an Advanced Performance Sequencing Tool. In a nutshell you build up to 8 instances which can be switched and manipulated by a series of triggers in real-time. Each Instance contains a Pitch Sequencer, Velocity sequencer, 5 freely assignable Sequencers (from a list of 46 Destinations) and 48 Synth Parameters. Each Instance can have completely different settings and assignments, which gives an enormous amount of freedom for creating unique grooves.

The Golden Crown of Kosmology is undoubtedly the fact that it can perform Wave Sequencing which means that you can assign a sequencer to select the currently playing instruments from all the included Sampled instruments. Both Synth A and B can be targeted individually which leads to instant satisfaction, creating an original sounding sequence can be as easy as selecting Wave A/B in a sequencer and hitting the Random Button. There is a Globals section which allows affecting 25 Parameters at the global Level, which can be automated in the host. These Parameters can add or remove from the current values, so as an example you could have a complex midi track in your DAW which switches between sequences rapidly and then automate a slow movement on the Cutoff Global which will open and close the filer regardless of which sequence is playing. 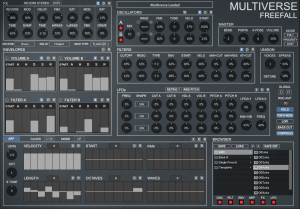 Multiverse is a scripted Instrument which emulates a dual oscillator synth design using the included sample collection as the sound source. The idea is that it is a fun and easy way to come up with unique sounds on the fly using the Randomizers, the Waveform randomize (W) being the most useful for quickly trying out pairs of waveforms and the Global Randomizer will Randomize all Random Enabled sections (X). This new version of Multiverse uses a Large single Panel GUI designed to be much more intuitive and logical to use compared to it’s previous version. 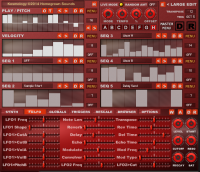 Be the first to review “Kosmology FreeFall K6” Cancel reply 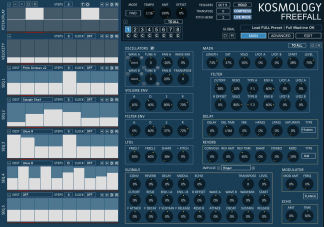