NOTE: This VST Plugin is 32-bit only

Vortex is a  VSTi Multitimbral Sequencer, equally adept as performance player or studio composer. It contains dedicated synths for each of its 12 sequencers … or, if you prefer, you can output any sequencer’s generated midi to your software or hardware instrument of choice … all internal synths, all midi output to your synth or any combination of the two on a sequencer by sequencer basis … it’s up to you!

It is a performance instrument with an emphasis on quick and easy music creation and is ideal for creating a dance/RnB/electronic foundation, although it can be used to make almost any style of music. One of it’s most fun and useful features is the series of real-time triggers which allow manipulating the sequences with effects such as Stutter (and programmable stutter), Restart, Half tempo, double step, note ties and mute amongst others. An octave of your keyboard is reserved for the triggers allowing easy sequence transformations. When sync mode is enabled, once all triggers are released the sequence will revert to it’s former playing state.

A great feature is a series of global knobs for subtracting or adding to the internal synth parameters, amongst them Filter Cutoff, Resonance, Filter Decay, VCA (Attack, Decay, Sustain, Release), Filter (Attack, Decay, Sustain), Noise Level, FM, Oscillator Mix, and LFO (Speed, Amount, Sustain). These knobs affect all synths simultaneously and so the entire output of Vortex becomes a single morphing and dynamic instrument capable of epic journeys into the unknown. All of these knobs have CCs and it’s strongly advised to set them up on your controller to get the most out of Vortex. 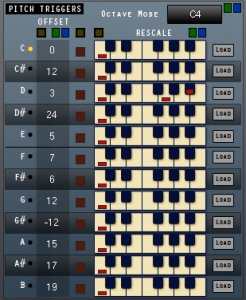 There is yet another octave of pitch triggers which can transpose the pitch and apply scales to the entire output on the fly, you can enable which sequences will respond to this in the same way as all other triggers. The pitch triggers are completely independent and can transpose to any value, the C4 octave on your keyboard controller is used to trigger them, although they can also be moved to C5 or C6. If you are using the Scale Re-mappers, there is also a great feature called Scale Shift which will shift notes up the selected scale. If a knob is assigned to Scale Shift it becomes a fantastic live performance tool.

Vortex began as a midi application and so the internal sound module is designed to behave as an external midi device. The idea is that you simply dial up presets rather than being faced with actual sound editing, although up to 10 CCs can be overridden in a session to give some sound editing possibilities.

Other features include a Multi-Sequencer which allows assigning multiple sequences to a single key, internal FX using the the TerraNova FX engine, a 16 channel midi mixer and 8 rows of assignable CC Knobs.